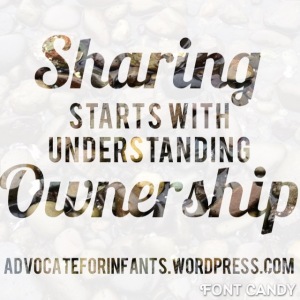 I recently read the chapter called “it’s ok not to share” in the book It’s OK not to share by Heather Shumaker. I already have a strong view point about sharing. I think that young children shouldn’t be expected to share. It’s such a big idea to understand and I think that children don’t fully understand it until they are in elementary school. Another aspect of sharing that I think a lot about is supporting children in becoming authentic sharers not fake ones.

“For true generosity, sharing should be built on trust and infused with the warmth of giving” (Shumaker, 120).

Think about experiences you have had as an adult with sharing. We don’t just share anything with anybody. If a stranger or even someone you kind of know asked to borrow your car you might say no (I would). Your answer depends on how well you know the person, how much you trust them, if you’re using the object they are asking for or you will need it later and how much the object means to you. So why don’t we let children move through these questions before we force them to share?

“True generosity is slower to develop in children who are forced to share on demand”  (Shumaker,117).

Wow, what a powerful statement! If I was forced to share a book that I was in the middle of reading, I would be so mad and I probably wouldn’t want to share books ever again.

So how do we help young children become generous sharers?

“Teaching young children to be generous starts with allowing them to be selfish” (Shumaker, 117).

Before we help children figure out the complexities of sharing, we first have to help them understand ownership.